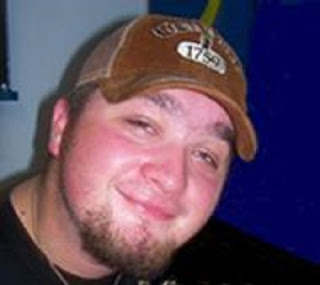 Message from President of LostNMissing Inc,
I had the honors of meeting Josh's father on April 6, 2012. My heart and prayers are with he and his family. What a horrible tragedy. Josh's father is very much interested in our Friends Don't Leave Friends Alone campaign as he too believes that we need to stress to our young adults the very importance of NOT venturing out alone.....whether male, or female.

Josh Szostak, 21, was last seen on December 22, 2007 at the Bayou Café in downtown Albany. After becoming separated from his friends, he left the bar and presumably headed back towards his car parked on Delaware Avenue. He vanished. His body later turned up in the Hudson River.

Details
It was the afternoon of December 22nd. Josh called his family's house in Latham the afternoon of December 22. He told them he was planning to go out. Wearing a black hooded sweatshirt with skulls and crossbones on the front, a white t-shirt, baggy jeans and tan sneakers, Josh headed to an Albany bar with enough money to go barhopping with friends around town. From there they went to the Bayou Cafe downtown. By midnight, the guys were ready to hit the next bar. Josh made a stop in the men's room. "His friends said they waited about 45 minutes, they were texting him, searching around, they went in the bathroom,” said Bill Szostak, Josh's dad. “Through the surveillance video at the Bayou we could see that Josh bypassed them all, went outside, used the cell, looked up and down the street and couldn't see anybody, decided his friends left and started hoofin’ it towards where his car was.” But Josh never made it that far. Video proves his car was left untouched outside the Elbo Room.

About Josh
Josh's dad, Bill, said “At Plattsburgh he was the lead radio jockey and he was nicknamed ‘the Stag.’ You couldn't go anywhere without people recognizing him and talking to him,” said Szostak. “Never did drugs, since he turned 21 he's been in college, on the weekends they go out and party and he drinks his beer. He likes his Guinness beer. Typical college kid.”

Clues
A car belonging to the state Department of Environmental Conservation was found damaged and abandoned at the Port of Albany. It had been stolen from a downtown garage, steps from where Josh's cell phone was spotted. Police initially labeled Josh a suspect in the car theft, but later recanted that theory, saying they had no evidence to support it. Szostak says he's told Josh's prints aren't in or on the car, which is now being combed for DNA evidence. And he says Josh's cell phone provides no leads because the law bars investigators from reading text messages sent to or from it.

The Search
Police initially concentrated the search in the area of South Pearl Street near the Bethlehem town line. As hours turned into days, search dogs were deployed to follow his scent. The dogs led the search party down Park Avenue, which is the first cross street in Lincoln Park down by Martin Luther King Monument. "If you're a block away from your vehicle, why would you be deterred to go down Park Avenue, unless you happened to be at the wrong place at the wrong time,” Szostak said. Joshua Szostak's family retained the services of a private investigator, who set up an anonymous tip line at (518) 424-7236.

Recovery
Josh Szostak's body was found by a boater on the Hudson River in Coxsackie on Tuesday, April 22, 2008. The clothing on the body matched what Szostak was wearing on the night he disappeared. The body was sent to St. Peter's Hospital in Albany for an autopsy. State Police Captain Wayne Olson said his body showed no sign of foul play or struggle and provides few clues as to how Szostak ended up in the Hudson. Keys, an ID and money were found on his body.

Autopsy
The autopsy performed by the State Police in Greene County, sought to determine whether or not Szostak was still alive when he was submerged in the water. “Based on the Medical Examiner's results, he died as a result of an accidental drowning,” said Public Safety Spokesperson James Miller. “It's difficult to pinpoint anything else based on his findings, there's no indication anything happened prior to that.” Within minutes of the release of these results, the Albany Police Department announced its case was closed. The State Police will review toxicology tests performed over the next couple of weeks to help provide more clues as to how a young man met this fate. State Police Captain Wayne Olson said his body showed no sign of foul play or struggle and provides few clues as to how Szostak ended up in the Hudson. Keys, an ID and money were found on his body.

Speaking on a radio show on News Talk 810 WGY, his father, Bill Szostak, said while he did not want to discredit the APD, the department did not allow the State Police or the FBI to lend their extensive resources. He said the State Police autopsy, which determined Josh most likely drowned, fell short of finding out what happened to his son.

Unanswered Questions
A twist that may never be resolved -- why Szostak's cell phone was found steps away from where a state DEC car was stolen. The car was found damaged and abandoned at the Port of Albany along the Hudson just days after Szostak disappeared. There were no prints on the car and DNA evidence was inconclusive.

2nd Autopsy conducted by Dr. Michael Baden
On Monday April 28, forensic pathologist Dr. Michael Baden performed a second autopsy on the body of Joshua Szostak at the Parker Brothers Funeral Home. Joshua's father, Bil Szostak, reached out to Baden, a world renowned pathologist, because he wasn't satisfied that his son's death was an accident. The family confirmed to Capital 9 News that the findings were consistent with those of the first autopsy (performed by the State Police in Greene County) which ruled Josh accidentally drowned. Like the first autospy, Baden found no evidences of injury or struggle. "The investigation as to whether he fell in accidentally because he had been drinking or whether he was pushed in or thrown in by others," says Baden, "really is a police investigation matter. The autopsy findings would be the same in either case.
info from
http://footprintsattheriversedge.blogspot.com/2007/12/122207-josh-szostak-21-albany-ny.html
Posted by LostNMissing, Inc at 12:00 AM No comments: