With sadness, the earthly body of Chelsea Bruck was located. Prayers for her family and friends and all who love and will miss her. Media: http://www.freep.com/story/news/local/michigan/2015/04/25/police-body-found-monroe-identified-missing-chelsea-bruck/26382573/ PREVIOUS REPORT: 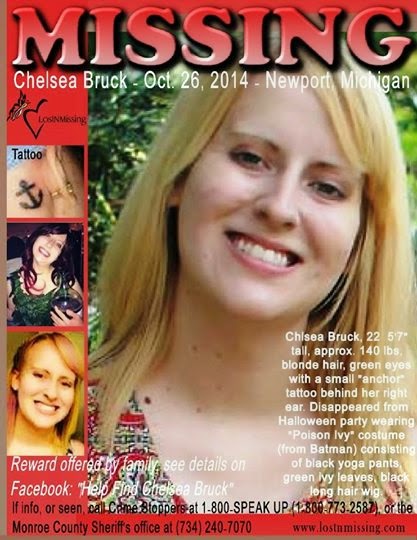 MONROE, Mich. -- Officials are seeking to find a missing woman, last seen at a Halloween costume party in Frenchtown Township, Michigan. 22-year-old Chelsea Ellen Bruck, was wearing a "poison Ivy" costume at a party at 3587 Post Rd. on Saturday. She wore black tight-fitting pants and a leaf covered top. The Monroe County Sheriff's Office said her family has not heard from her. Hundreds of people from all over Michigan and Ohio attended the party, who may have relevant information. Authorities describe her as a white female, green eyes blonde hair, stands 5'7'' tall and weighs about 140 pounds. She has a small anchor tattoo behind her right ear. Chelsea Bruck(Photo: Monroe County Sheriff's Office) If anyone has information, you're asked to call the Monroe County Sheriff at 734-240-7700 or Central Dispatch at 734-243-7070. Media: www.wkyc.com/story/news/local/2014/10/29/missing-woman-last-seen-at-halloween-costume-party/18115549/
Posted by LostNMissing, Inc at 10:36 PM No comments: