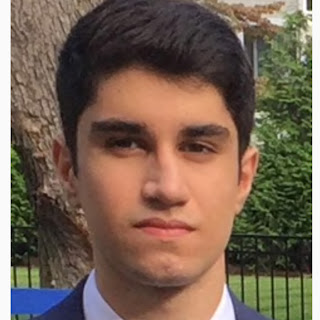 For more than 14 hours — in his car and on foot — Frank Sepehri had been looking for his 17-year-old son, Navid. He’d last seen him the night before and knew he had gone to a nearby party in Bethesda but not come home.
Just before 5 p.m. Sunday, Sepehri had made his way to a wooded ravine. On one side, above him, was a row of nice suburban homes. On the other, the parking lot of a swim club.
And in the gap, he saw his son’s body, floating faceup in a patch of frigid water.
“Navid!” he screamed — so loud that a nearby resident came running to help.

Navid Nicholas Sepehri (Dan Morse/Family Photo)
He pulled his son from the water, sat next him and spoke by phone with his wife, Nasrin.
“He’s gone,” he said. “I found him.”
The discovery answered the most pressing questions about the missing Maryland teenager — was he alive and where? — but leaves investigators with Montgomery County police continuing to piece together what happened to the Walt Whitman High School senior.

On Tuesday night, police officials spoke in detail about what they’ve learned in the case, in part from information pulled from video captured by officers’ body cameras. Police officials said officers had crossed paths with Navid on Saturday night and had crossed paths with his father about five hours later, when he was searching.
We want to determine exactly what the actions of our officers were,” Montgomery Police Chief J. Thomas Manger said in an interview Tuesday. He said his heart went out to the Sepehri family. “I just can’t imagine the pain they’re going through,” he said. Autopsy results are pending. Police said they do not suspect foul play. The account police know so far shows that on Saturday night, officers were called for a report of a possible teen-drinking party in a home along Elgin Lane in Bethesda. When they arrived, they saw kids running away. They also found a group of teenagers in the street, including — as investigators would later learn from watching the body cameras — Navid. The officers spoke with the teens in the street, who said they were not driving and were waiting for their parents to pick them up. Navid appeared to have been drinking but was upright and responding to officers, police officials said. Officers at the scene learned that there had been a party at the house. Homeowners found out that uninvited guests — who likely heard about the party on social media — had brought alcohol, officials said. The homeowners asked the teens to call their parents for rides home and to leave, officials said. Homeowners found out that uninvited guests — who likely heard about the party on social media — had brought alcohol, officials said. The homeowners asked the teens to call their parents for rides home and to leave, officials said. The officers did not have any reason to take anyone into custody and left the house, according to police. At Navid’s home along Radnor Road — about one mile east — Navid’s parents grew worried when they hadn’t heard from him. His father began driving the neighborhood, trying to spot him, and at 3:23 a.m., Navid’s father pulled into a parking lot of the county police department’s district station in Bethesda. He spoke with at least one officer, did not file a missing person’s report and went on his way. In an interview, Navid’s father said he was told by an officer in the lot that his son was probably at a friend’s house. Navid’s father said he returned home, hoping to hear from his son, but still couldn’t get any response on his cellphone. About 8 a.m. Sunday, he said, he started searching again, At 12:46 p.m., police finally received an official missing person’s report from someone they have not named. Police searched for Navid near the area where he was last seen. Navid’s father was later told by police that investigators who searched Navid’s clothing found a bottle of vodka in his pocket. Navid, who had a younger sister, grew up in Bethesda, enjoyed soccer and karate as a youngster, and was to graduate this spring from Whitman. He planned to study computer science at the University of Maryland at College Park, according to his father. “He was always happy, always smiling,” Frank Sepehri said. And smart: Two months ago, he persuaded his father to buy shares of bitcoin, which have since shot up in value. Sepehri said he last saw his son alive at 7 p.m. Saturday, when he left home. He didn’t want to drive the new Mazda his parents had bought for him, according to his father. As his father would later learn from bank records, he said, Navid also withdrew $20 Saturday night from an ATM. Frank Sepehri said his son may have used the money to buy vodka and, if so, wants to find out whether a store sold it to him. Friends described the teenager as well-liked, giving and hilarious, the one who always cracked them up. He was about to turn 18 in January and was in the stretch of senior year when students savor the months they have left with high school friends before they head off to college. Colleen Harkins Carter, whose daughter Madeline Kostopulos was a close friend of Sepehri’s, spent part of Tuesday afternoon with Sepehri’s mother, as the woman shook with grief and cried in the parking lot outside the Bannockburn Swim Club, not far from the site where the teen died. More than two dozen of the teen’s friends gathered with her, standing in the cold, sobbing, heads down and hands jammed in their pockets, she said. They were devastated. Carter said she told the students that the loss was every mother’s nightmare. “This could be any of us,” she said. “Don’t leave each other alone, and don’t encourage binge drinking.” https://www.washingtonpost.com/local/public-safety/a-night-long-search-for-their-missing-son-ends-in-the-woods-hes-gone-i-found-him/2017/12/12/4b661b24-df82-11e7-bbd0-9dfb2e37492a_story.html?utm_term=.c724c29021ad
Posted by LostNMissing, Inc at 11:16 AM