Today I received a message on Facebook from a concerned follower who pointed me to a website in which a young man has put together outlining numerous "death by water" in the midwest.
The author indicates a strong belief in a possible "serial killer" who is murdering our young men.

I am also very much aware of the "Smiley Face" killer who leaves a smiley face engraved at the river's edge of places that young men are located deceased. I know investigators write of this "Smiley Face" serial killer and while I have never had proof from any police agency that we work with, I will not automatically overlook theories but rather leave those theories to those who are investigating them. I also will not overlook the possibility that someone was indeed harmed and thrown into the water, however...I do not believe that nearly every case of a missing young male, found deceased in water, is due to a murder.

With that said, I responded to the young woman with the following...which is something that I strongly believe is the real "reason" so many young are found deceased in water as well as why we , at LostNMissing, strive to bring awareness of the "Don't Leave Friends Alone" campaign as we know that in EVERY SINGLE CASE of young men and women (mostly men) located by death in water....in nearly all cases (if not suicide) that alcohol took place. 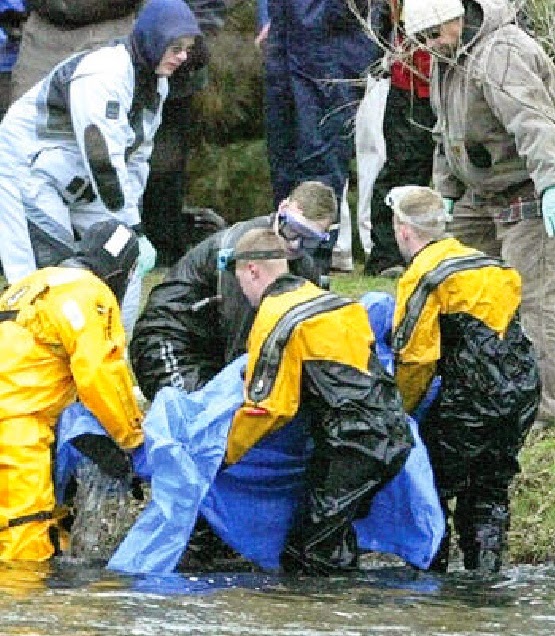 We also know of no case, that we've experienced, in which those who drowned left with a friend and trailed off into water while a friend watched or was helpless to go in after them. I'm sure this has happened, we just have not encountered this as a case.

Adding to the above, we would love to know if any young person, under the influence of alcohol, left an establishment with a friend and while with the friend TRIED TO GO into water and the friend was able to steer them away. If the theory that a body chemistry could have an "alcoholic hypothermic effect" then a body would have the same effect whether solo, or with someone else. However, how often would it be reported that "my friend was not in the right way and tried to go into the river?" Not often as most would go to safety and perhaps the next day it would be a "Wow, you were way off the wall and I saved you from trying to go into water" and be left at that. (Making an assumption here.) So if anyone has had this experience, I would love to learn more and you can email me at cyndicaron@gmail.com .

We hope more studies will be done as this makes more sense, from a medical-clinical point of view, as opposed to a serial killer that has reach all over the United States and at times...on the same date from each end of the country.
Hypothermia occurs most often among people who abuse drugs or alcohol, the chronically ill, very old or very young people, and those who are malnourished, according to the National Institutes of Health. The best ways to avoid hypothermia are to wear proper clothing, such as mittens (not gloves), hats, scarves, and dry, windproof layers of clothes. Take extra precautions in extremely cold and/or wet weather, high winds and around water — water pulls heat away from the body about 25 times faster than air. Drinking alcohol can actually help bring on hypothermia, since alcohol — in addition to encouraging risky and irrational behavior — can also induce vasodilation, the opening up of blood vessels that results in bodily cooling....and always have a friend. ____________________________
I read, "Drowing in Coincidence" and I read the message sent to the author and I am going to agree with the author of the message, not of the author of the article. If you review our site www.dontleavefriends.com you will find that while rumors are high about serial killers, the majority of nearly all those young who pass by water is not just in the Midwest, but all over.
I have talked with a Phd Chemist who is doing a paper , and I hope to find it released soon, that many of these deaths are in fact due to the possibility of "Alcohol Hypothermic Effect" , which at present is not a known diagnosis as it pertains to going from indoors to outdoors after consuming alcohol but one that needs researched. At present it is a diagnosis for those under the influence and the cold weather.
It is believed that those who are in an "indoor environment" such as a tavern, bar, nightclub or house-party....and consumes alcohol (no matter the amount)....that the exit of the indoor environment (whether cold or hot outside) causes IN SOME PEOPLE an abrupt body change that creates an almost "hypothermic" effect and they are invariably drawn to water and unfortunately end up drowning.
While this has not been proven by medical society, as yet, we do know that it is being explored as a high probability.
Thank you for your message.
Cynthia Caron, Pres-Founder, LostNMissing Inc.
____________________________

Of interest:
, poikilothermalpoikilothermous (poy'ki-lō-ther'mic, -măl, -mŭs)Causing a disruption of normal hypothalamic thermoregulatory function, as seen with drugs such as phenothiazines.

1. low body temperature, such as from cold weather, or from artificial induction to decrease metabolism and need for oxygen during surgical procedures.
2. a reduction of core body temperature to 32°C (95°F) or lower, as that due to exposure in cold weather or that induced as a means of decreasing metabolism of tissues and thereby the need for oxygen, as used in various surgical procedures.hypother?malhypother?mic
accidental hypothermia  unintentional reduction of the core body temperature, as in a cold environment.


Get Naked and Dig: The Bizarre Effects of Hypothermia